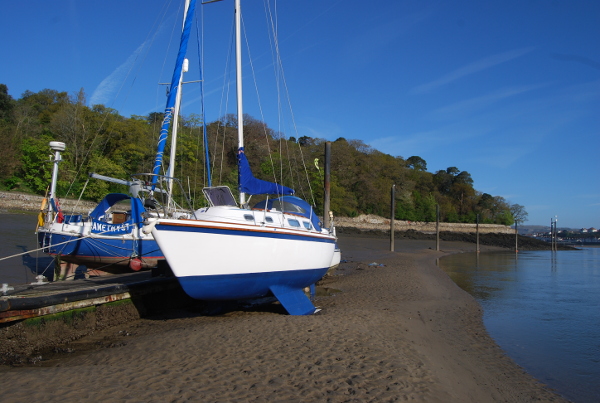 Curiosity is dangerous and has killed the cat in the past. In the autumn of 2012 we started to look on various web sites to "see" what other boats look from the inside and see what sort of space improvement they might offer over our Westerly 22. Couch browsing was followed by a day out to a few marinas to "see" the real thing. The real things ranged from a modern fridge to an old wreck. Therefore more web searching was required. Most boats had in common that they offered little more extra space for a lot of money. On average for 3 foot extra length we would pay £6000. Punching this carefully into the calculator the unexpected outcome indicated that this was roughly £2000 per foot. That is one expensive foot, not even providing a whole leg.

Eventually we came across a Westerly Griffon. The Griffon had a secret; besides the extra meter in length, it also provided more width and depth, resulting in six berths, 2 of which are double, a heads (toilet), a galley, inboard diesel and a wide dining table. That was the inside sorted.

The other slight disadvantage of the Westerly 22 is that she doesn't sail well against the wind. Whenever she met a wavelet in wind force above a Beaufort 2 she would stop and think about her next move. We spend more time thinking than sailing. The Griffon appears, in comparison, to slice through the waves and where before 4 knots would make us think the American Army was jamming GPS signals, now 6 knots are more the norm.

Here follows an illustrated extract of our sailing log.